Karlin Lillington's weblog on whatever comes to mind...

From the Guardian's great tech onlineblog.com:

Browsers -- the good old days. It's almost 10 years since the Web browser came to public view with the first version of NCSA Mosaic, and USA Today has taken the opportunity to refresh old timers' memories, and enlighten the youngsters. It's a fascinating story, and made Marc Andreessen a media star. Mosaic changed the Web, compared with Tim Berners-Lee's original browser, because it left out the page creation aspect and introduced graphics, making it more of a one way and less of a two-way medium. One story that is new to me: "At a conference, Berners-Lee yelled at Andreessen, telling him that adding images to the Web was going to bring in a flood of new users who would do things like post photos of nude women."

Mr Robin Cook has resigned from the British government as Leader of the House of Commons, Downing Street announced. The former Foreign Secretary indicated that he would step down if Britain joined the US-led attack on Iraq without securing a second UN resolution. Mr Cook is due to make a personal statement to the Commons later this evening.

Foreign Secretary Jack Straw is also due to address MPs at 7.00 p.m., with the prospect of another ministerial resignation hanging over the government. International Defence Secretary Clare Short has also threatened to quit over what she described as Mr Tony Blair's "reckless" handling of the Iraq situation.

BTW, green typeface brought to you by St Patrick. We'll resume normal, easier to read but less fun black tomorrow! And did anyone else noted that Google did nothing on its homepage for St Patrick's Day?! Usually it has some amusing and delightful artwork around the Google name on holidays and for special events. Nothing even on Google.ie. Alas!
6:02:38 PM  #   your two cents []
The perfect storm hovering over tech. Declan McCullagh explains why a brittle technology recovery could be endangered by a combination of political factors coursing through the nation's capitol. [CNET News.com]
6:00:11 PM  #   your two cents [] 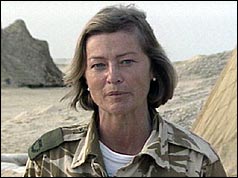 As the talk on this side of the water is already of war starting today/tomorrow/this week, I simply have to join others and post the transcript (mentioned below) of the interview on Irish Radio with veteran BBC war correspondent Kate Adie. Extraordinary. As Adie notes at the end -- don't expect to read anything remotely reflecting the situation in Iraq until after the war, when journalists can write what they saw, uncensored. Maybe some of the blogs from the warzone will be different, but I doubt it. From  GuluFuture (links to the audio there; too). For American readers, this is a correspondent with the weight of a Tom Brokaw or Dan Rather -- the most senior and most professional of correspondents, widely respected by an entire nation:

Kate Adie:  "…And what actually appalls me is the difference between twelve years ago and now. I've seen a complete erosion of any kind of acknowledgment that reporters should be able to report as they witness. The Americans... and I've been talking to the Pentagon ...take the attitude which is entirely hostile to the free spread of information.

" I was told by a senior officer in the Pentagon, that if uplinks --that is the television signals out of... Bagdhad, for example-- were detected by any planes ...electronic media... mediums, of the military above Bagdhad... they'd be fired down on. Even if they were journalists ..' Who cares! ' said.. [inaudible] .."

Tom McGurk: "...Kate ...sorry Kate ...just to underline that. Sorry to interrupt you. Just to explain for our listeners. Uplinks is where you have your own satellite telephone method of distributing information."

Kate Adie: " The telephones and the television signals."

Kate Adie: " Yes. They would be 'targeted down,' said the officer."

Kate Adie: " Shameless! He said.. ' Well... they know this ...they've been warned.'  This is threatening freedom of information, before you even get to a war. The second thing is there was a massive news blackout imposed. In the last Gulf war, where I was one of the pool correspondents with the British Army, we effectively had a very, very light touch when it came to any kind of censorship.

" We were told that anything which was going to endanger troops lives which we understood we shouldn't broadcast. But other than that, we were relatively free. Unlike our American colleagues, who immediately left their pool, after about 48 hours, having just had enough of it. And this time the Americans are: a) Asking journalists who go with them, whether they are... have feelings against the war. And therefore if you have views that are skeptical, then you are not to be acceptable.

" Secondly, they are intending to take control of the Americans' technical equipment ...those uplinks and satellite phones I was talking about. And control access to the airwaves. And then on top of everything else, there is now a blackout (which was imposed, during the last war, at the beginning of the war), ...ordered by one Mr. Dick Cheney, who is in charge of this.

" I am enormously pessimistic of the chance of decent on-the-spot reporting, as the war occurs. You will get it later."

1:05:50 PM  #   your two cents []
Nearly 20 years ago, I remember people were travelling to view a tortilla in Los Angeles in which supposedly you could see the face of Jesus. I can't remember if it came out of a package or was homemade. And then, less than a decade ago, we had moving statues of the Virgin in Ireland. From Sunday's Observer: God reveals himself as a fish: "According to two fish-cutters at the New Square Fish Market, the carp was about to be slaughtered and made into gefilte fish for Sabbath dinner when it suddenly began shouting apocalyptic warnings in Hebrew."
12:18:53 PM  #   your two cents []
Patten wins Oxford prize. EU commissioner Chris Patten to be Oxford University's next chancellor. [Guardian Unlimited]
12:11:03 PM  #   your two cents []
Mark Twain. "Few things are harder to put up with than the annoyance of a good example." [Quotes of the Day]
10:54:14 AM  #   your two cents []
Ludwig Erhard. "A compromise is the art of dividing a cake in such a way that everyone believes he has the biggest piece." [Quotes of the Day]
10:51:29 AM  #   your two cents []
Technology Executives Assemble on a Muted Note. There is a long way to climb back from the peak of the bubble years, executives gathered at the CeBIT technology convention in Germany pointed out.  [New York Times: Technology]
10:49:56 AM  #   your two cents []
From Danny O'Brien's Oblomovka: kate adie reports on the war media. war media doomed.

When I first came to Silicon Valley, I joked to people in back in the UK that I wanted to be the Kate Adie of the upcoming dotcom collapse. It was a nice funny shorthand to explain less what I was doing, and more what I thought would happen to the Valley in the next few years. Adie is famously the reporter who the BBC used to send into the midst of any major disaster, all flack-jacket and pearls, from the Iranian embassy siege to Lockerbie to Tiananmen square. She's more than an icon of war reporting in the UK. She's the fifth horsemen of the apocalypse. When Kate turns up, you know you're in trouble.

So when she starts talking about a senior officer in the Pentagon telling he that all TV uplinks from journalists will be fired upon, and that the American forces are asking the press who go with them whether "they have feelings against the war" before they let them tag along, and that she is "enormously pessimistic of the chance of a decent on-the-spot reporting, as the war occurs.", I sat up and listened.

Adie says "You will get it later." I hope so. I hope someone watches it. (from robin @ ambiguous)

Sun and smiles and painted faces -- the Irish Times on our decidely un-Irish sunny weekend. In all my years of living here I've never seen a sunny St Pat's weekend -- much less a sunny St Pat's three-day weekend!!

The sun has emerged as the undisputed star of the 2003 St Patrick's Festival in Dublin. All weekend, people have been walking around in a sort of daze, wearing puzzled expressions and sunglasses, sweating under green Afro wigs.

Ice-cream stands are doing a roaring trade, picnics are being held in the parks. In March. In Dublin. Hail glorious St Patrick.

That They May Face the Rising Sun
By John McGahern
Blood, Tin, Straw
By Sharon Olds